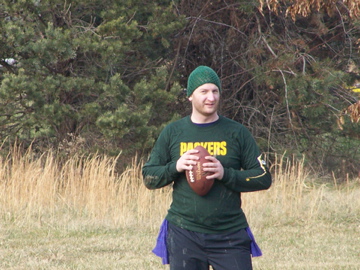 It was New Years Eve in the back lot of the church we had our first ever old men vs. young men football game. The field was perfect. Soggy and muddy. The teams were recruited ahead of time. The young men had an air of we-can-out-run-these-guys and the old men had an air of with-age-comes-experience.

The game became kind of lopsided with the old men taking the advantage behind their veteran QB, Pete Sr. I play defense mostly, trying to strip the flags from their belts and potential TD’s from their score. For the most part I did okay. Until Kyle Miller took the ball. Kyle Miller has thighs like a tree trunk, but cannot cut East to

West in the mucky terrain. Pastor Kenny and I were going after him at the same time. I reached for Kyle’s flag and snatched it out. I fell in the process right into Pastor K’s knee. CRACK. I knew it right away. It was broken. My nose didn’t bleed  much nor did it hurt all that bad, but it was most certainly bent. Pastor K later took me to the ER in our muddy clothes. I have been down this road 4 other times:

1. baseball (chop hit to the face)

2. softball (flyball blocked by another glove)

3. frisbee (run in between 2 throwers)

4. basketball (elbow in the box)

So breaking the nose is nothing new. I suppose this Polish shnoze of mine is sort of like a magnet. I needs a little stick that says, “Caution, danger, will break if touched.”

I go to the doc next week to get it worked on. Been there before too. Hopefully this time they will make it a little straighter.

Oh, and the old guys won!