Ned Anzers: Is there life after death?

Death is a scary thing. Survey says it is #1 on a list of things that people fear. We all want to know whether there is more to life after death. In the face of death Jesus gives His followers some really comforting words, “I am the resurrection and the life. Whoever believes in me, though he die, yet shall he live, and everyone who lives and believes in me shall never die. Do you believe this?” (John 11:25-26) Interestingly enough Jesus said these words at the funeral of a friend.

If I believe in Jesus I will be resurrected live with Him. There is power of a few words. For example not too long ago I asked a good friend this question: “Will you go out me?” Lucky me, her response was, “Yes I will.”  However, there are a few other 3-word responses that she could have had that would have determined the course our relationship like: “No I wont,” “I feel sick,” “get the bill,” “ha ha ha!” 3 words make all the difference. Now there are 3 words spoken that changed the course of mans eternal destiny and hope for an after life. “Christ is Risen!” (Mt.28:6)

3 days after Jesus died He rose from the grave and was alive! It was miraculous. No one in human history has ever done this feat before or since on their own. 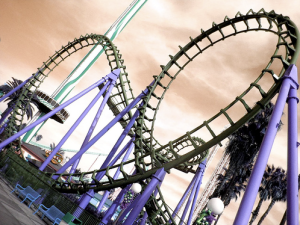 What difference does the resurrection make?

Well to illustrate this question a few years ago my brother and I went to Great America in Chicago. My brother had never been on a large rollercoaster before and I wasn’t going to play around the small game area all day. I coaxed him to go on the Ragging Bull. He was so nervous. As we were in line he watched thousands ride and enjoy it and they all have lived. He did it and lived to tell the story.

Just the same Jesus is the first and only person to who has ever died and overcome it completely. He will never die again. He is deaths master. He conquered the grave. And if we follow Him we too can live and be resurrected from the dead [resurrection = brought back to life].

How do I know Jesus died and didn’t fake it?

Eyewitnesses tell us that He was dead (Jn.19:31-37). You see the Roman executioners were expert killers: Broken legs, pierced side, and a heavy mummy wrap in a sealed tomb all add up to proof that there is no way Jesus could have lived through the crucifixion or 3 days in the grave.

Could the disciples have stolen Jesus body?

Jesus rise from the dead was a hoax, right?

Not. He was seen by over 500 some people (1 Cor.15:3-8, 6). His disciples even died for their belief in Jesus after the resurrection. Even Thomas, the most skeptical of the disciples believed.

Harps and clouds! I hope not. There is not a lot spoken about it. I suppose He wants us to live here and not be so preoccupied with its details. Isn’t it okay for God to have some secrets? What He does say is that it will be perfect, like a feast, we will have rooms within the great city—a real place, we will have real bodies and recognize each other.

Is there life after death?

From what the Bible says, yes!

One thought on “real questions: death?”