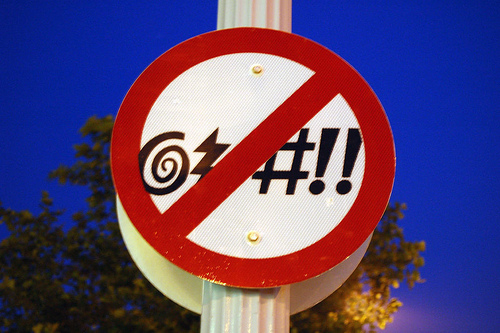 Do you remember when you first learned a swear word? I must have been 6 or 7 years old, and I was left alone watching the TV. I recollect there being a Steven Seagal fight’em, shoot’em flick on the tube. There were lots of fist and words flying. I was glued. Dad came into the room and I asked him, “What does, !@#4%&* mean?” I quickly found out that it meant something bad as I got a good dose of fist to my hindquarters.

I am ashamed at how many derogatory words I know. I made a list of all those I know that just begin with the letter D. I came up with: dork, do-do, dufus, dingleberry, dumbo, dinkledorf, dwarf, dirtbag, dweeb, deadhead, dunce, doosh, and the list goes on (and these are the semi-tame ones).

Why is our society is so profane? Does my mouth really matter? Yes, enough so that God includes it in His list of commands. The Third Commandment: “You shall not take the Lord’s name in vain.” (Exodus 20:7) In other words, we are not to use Gods name as a swear word. We are to protect the integrity of His name. We are not to misuse His name. We are not to “dis” God with weak-sauce language. We are not devalue or make His name irrelevant (empty). Gods name is different than any other name. God is God and we are not. He tells us over and over in the Bible to hold up His name.

Last night I asked out student ministry how many of you hear cussing daily at school? Over 75% of them raised their hands. Cussing among teens seems like a second language or at the least second-hand language. I read that the average teen uses 80-90 swear words a day []

I am not proud to say but in middle school I had a bleepin’ little-sailor potty-mouth. And yes, I did kiss my mom with that mouth? I found myself to be in one of these 4 Groups of swearer’s, maybe you find yourself in one of these too:

1. The Blond-Moment Swearer—This person is clueless they are even swearing. He swears so much that it is a habit. He doesn’t even know he uses Gods name as a swear word. God is just a fill word: “God, I’m tired”, “What the hell,” “Jeeze, it’s been a long day.” This person is not calling on God, they are unaware of God.

2. The Stuck-in-Traffic Swearer—This person knows swearing is wrong, but when in the right situation they “can’t help but swear.” You know you are stuck-in-traffic swearer when you respond cussing in these scenarios: a hammer hits your finger instead of a nail, the foul isn’t called, someone cuts you off, your favorite sports team makes a mistake, you lost your homework, or your friend tells you off.

3. I-can-say-what-I-want-to-when-I-want–to Swearer—This person knows what they say is wrong, but couldn’t care less. Like a pirate. These people are either angry at God or shake their word-fist in God’s face. They swear to God with outright rebellion.

4. The Walk-Your-Talk Swear—This person doesn’t ‘dis’ God with his words, but his walk. Even though you may not swear, you may have an empty walk. This person says they are a Christian, but their lifestyle doesn’t match their words. If you wear Christ’s name you better show it. “Walk your talk!” As followers of Christ you are a walking billboard to the world of Him to everyone who sees you. God has pasted His label on you, what do you represent?

The Bible says that the name of Jesus is above every other name, and one day we will all bow our knees to the name of Jesus (Phil.2:9-11). In fact, Jews had such respect for God that they would not use His real name (Yahweh). Never would they speak His real name. They would use “Adonai” instead. They recognized His name as holy. When Jesus prayed, He taught His disciples by saying “Father, hallowed (holy) be your name.” (Luke 11:2)

We must careful what you say. When you say, “God” followed by the word “damn” you are putting two words together that do not fit. God doesn’t damn anybody by our demand; people damn themselves to hell by their sinfulness without repentance and forgiveness. We cannot tell God what to do. We make Him so small, when He is really BIG. You are the creation; God is the Creator. Do not take what you say too lightly.

Matt.15:18 says, that the things that come out of your mouth, come out of your heart. In other words, dirty words = dirty heart. So how can I tame my tongue? First, talk it up. If you are a swearer get help, sometimes it takes a buddy system to help you to stop it! The Christians life wasn’t meant to be lived alone; there is no such thing as a Lone Ranger Christian. Second, critique your talk—evaluate the words you use. Do you honor the name of God? Third, talk about God—when you know Him you wont empty His name out.