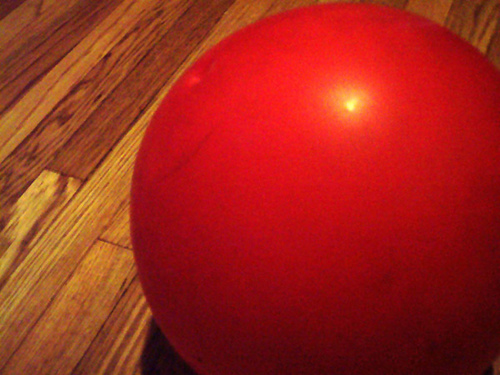 Sometimes it really hurts to drop the ball, especially when you have been holding on it so well for so long.

Dropping the ball can be devastating and even handicapping to one’s life. Some never recover from dropping the ball. Some drop the ball so much that they just make a habit out of ball dropping. Others may think that they are superior to dropping a single ball. Whatever the case we drop balls. All that matters is how we respond after it has been dropped.

As you have probably noticed this is a parable. The ball can represent anything: a career, a relationship, a goal, or a sinful decision in your walk with God. Dropping the ball mean you have failed to live up to certain expectations that are associated with that ball.

There are many responses to dropping the ball. Some of the most common responses are:

The Blame Game Response. This person responds by saying, “Dumb ball! Who made this cheap ball? It’s too slippery!” It is the ball’s fault. It is always somebody or something that made them drop the ball. The devil gets an awful lot of blame. It seems like nobody is ever at fault for his or her own actions.

The Lone Ranger Response. This person will commonly respond, “Where were they? I cannot believe they were not here when I drop the ball! What kind of person are they? If they really loved me…” This person feels as if no one cares and they are left alone when there is no immediate comfort for their actions. I like to call this the Eeyore Response. Remember the donkey from Winnie the Pooh who is dismally gloomy for almost eternity and expects little from his friends.

The Genetic Response. This person will say, “I drop the ball because my dad dropped the ball. All I know is what I was taught. I cannot help it, It is just the way I am. I drop balls, it is in my genes.” Since, there is a pattern of ball dropping in a family or down through history it is assumed that it is in our genetic make up.

The Cop-Out Response (or the Woe-is-Me Response). This person will label himself or herself by saying, “I am such a loser! I always drop the ball. Other people don’t drop the ball like I do. What’s wrong with me?” This person might realize that dropping the ball is their fault, but they don’t do anything about it.

The Fatalistic Response. This person pessimistically says, “Who Cares. I dropped the ball. So what? I will drop it again. I am only human” This person believes they are never going to carry the ball so they give up trying.

The Right Response. “It’s my fault. I dropped the ball. I’m going to pick it up and keep going.” Take ownership of your dropped balls. Pick it up and hold it tight. Share the load with others if you are in a relationship of dropped balls. Don’t look like the weenie kid on the play ground who cries to mommy because they dropped their ball and are too lazy or stubborn to get it back themselves.

God says in His Word that we must turn from your sins and embrace Christ. Acts 3:19 “Repent, then, and turn to God, so that your sins may be wiped out,” And then in Acts 5:29, Peter and the other apostles said, “We must obey God rather than men! 30 The God of our fathers raised Jesus from the dead—whom you had killed by hanging Him on a tree. 31 God exalted Him to His own right hand as Prince and Savior that He might give repentance and forgiveness of sins.” There are great promises of restoration and forgiveness to those pick up their dropped balls.