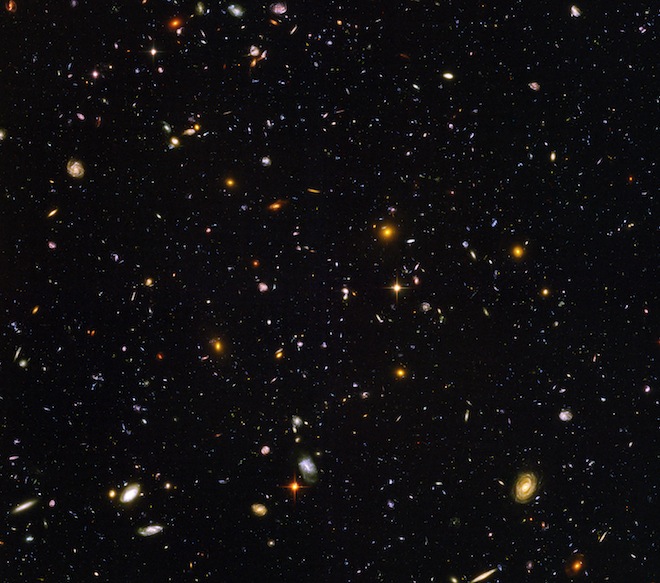 I love this picture.

NASA’s Hubble Space Telescope has produced the deepest image of the universe ever taken. Astronomers generated this picture by pointing Hubble at one small patch of the sky for several months and recording every tiny photon of light they could get. It is as if you took an average sized coin and held it up to the night sky. The entire image contains nearly 10,000 galaxies, but here you can see a small sample of what’s out there.

The universe is vast. Huge. Ginormous!

The Bible says, that God has given each of the stars a name,

He determines the number of the stars;
he gives to all of them their names.
Great is our Lord, and abundant in power;
his understanding is beyond measure.
(Psalm 147:4-5 ESV)

To whom then will you compare me,
that I should be like him? says the Holy One.
Lift up your eyes on high and see:
who created these?
He who brings out their host by number,
calling them all by name,
by the greatness of his might,
and because he is strong in power
not one is missing.
(Isaiah 40:25-26 ESV)

Almost all the stars in the universe are collected together into galaxies. They can be small dwarf galaxies, with just 10 million or so stars, or they can be monstrous irregular galaxies with more than 10 trillion stars. Our own Milky Way galaxy contains an estimated 200 billion stars, which is average for a galaxy in the universe.

So how vast is the universe? Know one really knows nor has seen the edge of deep space. Astronomers estimate that there are approximately 100 billion to 1 trillion galaxies in the Universe [about 1024 stars] or between 10 sextillion and 1 septillion stars in the universe, but that may be on the small side of the scale. That’s a large number of stars. And God created each and knows each by name.

2 thoughts on “how vast is the universe?”