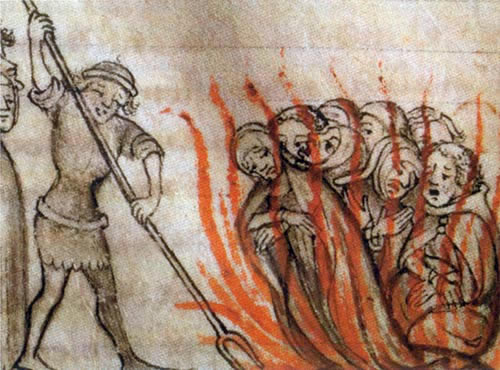 “What exactly is heresy? In the ancient church, that is the church up until the sixth century, the term “heresy” became a technical term to describe aberrant teaching that undermined the fundamental truth of the Christian faith. It was deemed so serious that those who were described as heretics were considered to be beyond the bounds of salvation.

Our English word “heresy” comes from a Greek word hairesis, which, in classical Greek meant “choice.” This use of this term does not occur in the New Testament. Six out of nine occurrences of the word in the New Testament are best translated by the words “sect” or “party.” Thus, for instance, in Acts 26:5, the apostle Paul claimed that “according to the strictest party [hairesin] of our religion I lived as a Pharisee.” And in Acts 24:5, Paul is described by the Roman lawyer Tertullus as a “ringleader of the sect [haireses] of the Nazarenes.” Hairesis, though, can also have a decidedly negative meaning. Paul lists it as one of the works of the flesh in Galatians 5:20, where he has in mind factionalism, not heretical teaching.

In only one New Testament verse, however, does the word carry the full meaning of our word “heresy.” That occurs in 2 Peter 2:1 where Peter says that false teachers will “secretly bring in destructive heresies [haireseis], even denying the Master who bought them.” But even a cursory reading of the New Testament letters will reveal that although the term “heresy” is not used, this is indeed what a number of the letters are seeking to protect God’s people against. Paul, for example, had to stand against those who denied the resurrection of the body in 1 Corinthians 15 and repudiate those in Galatia who would compromise the cardinal truth of justification by faith alone. And Jude, referred to earlier, is clearly dealing with aberrant theology that we could call “heresy.”

– Michael A. G. Haykin, Defence of the Truth: Contending for the Faith Yesterday and Today (Darlington: Evangelical Press, 2004), 10.

A couple of helpful resources on the issue of heresy are, of course, G. K. Chesterton’s Heretics, Harold O. J. Brown’s Heresies which are now both considered to be classic treatments of the subject. More recently, Alister McGrath has written Heresy: A History of Defending the Truth (San Francisco: HarperOne, 2010).